by admin
in Travel Health & Safety
0


A new report has been released today by the United Nations Secretary-General António Guterres, titled Progress towards the achievement of global tuberculosis targets and implementation of the political declaration of the high-level meeting of the General Assembly on the fight against tuberculosis. The report stresses that high-level commitments and targets have galvanized global and national progress towards ending TB, but urgent and more ambitious investments and actions are required, especially in the context of the COVID-19 pandemic. The report was developed with the support of the Director General of the World Health Organization (WHO) as requested in the political declaration of the 2018 UN High Level Meeting on TB.

The Secretary-General’s report, based on data submitted by around 200 countries to the WHO Global TB Programme, provides a review of progress towards global TB targets and on the implementation of the Declaration. Despite recent achievements in driving down incidence and deaths, and in closing gaps in access to prevention and care, the report underscores that the gains are fragile. TB remains the world’s top infectious killer.

Member States are urged to implement the 10 priority recommendations to put the world on track to reach agreed targets by 2022 and beyond, and to reduce the enormous human and societal toll caused by TB.

“This is a “game-changing year” in which countries are at the mid-way mark in their efforts to achieve the targets of the UN Political Declaration thanks to national and political action. However, these gains are at risk especially due to the COVID-19 crisis.” said Dr Tereza Kasaeva, Director of WHO’s Global TB Programme. “We must urgently take bold actions that will dramatically transform the TB response. While we struggle to overcome the COVID-19 pandemic together, we should not leave behind the millions of people suffering and dying from TB. All lives matter!” 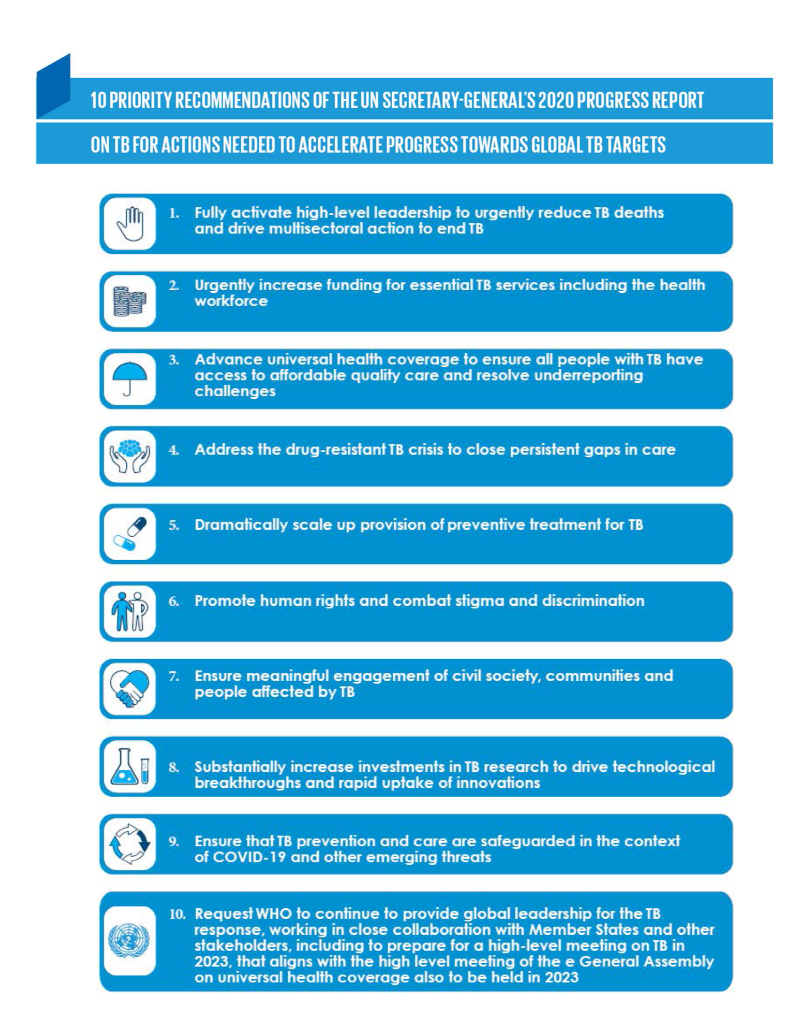 The recommendations outlined in the report were discussed official UN General Assembly side-event: “Progress and Multisectoral Action towards achieving global targets to end TB” co-organized by the World Health Organization and the Russian Federation on 23 September. Held on the sidelines of the 75th UN General Assembly, the event brought together a distinguished line-up of speakers spanning WHO and UN leadership, health ministers, partners and civil society.

First ever vaccine listed under WHO emergency use