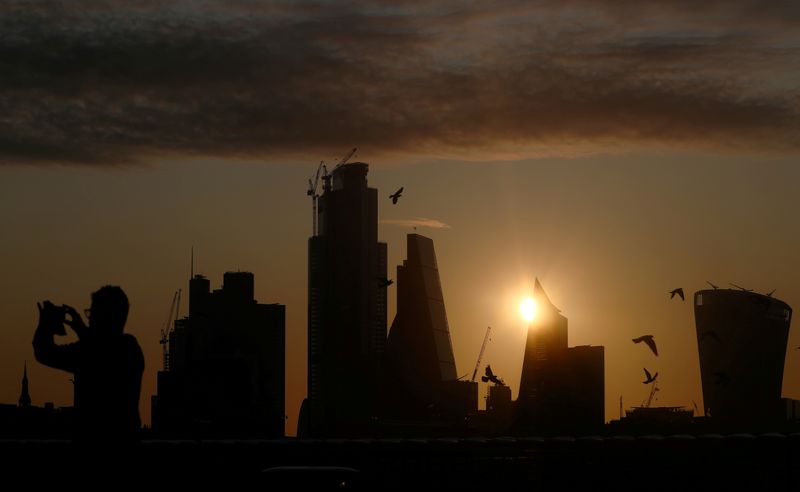 © Reuters. FILE PHOTO: A man takes a photograph of the skyline as the sun rises behind the city of London financial district in London

LONDON (Reuters) – The European Union is trying to grab a slice of the City of London’s multi-billion euro derivatives market after Brexit but EU regulators risk driving some of the business to New York from January if there is no clarity on rules.

London is the world’s biggest centre for trading derivatives or swaps, but from December 31 it will lose direct access to EU customers unless EU and British regulators avoid a clash over where and how banks can trade these products.

In the meantime, EU bank branches in London might look to platforms in the United States that can serve EU clients, industry officials and regulators said. This would avoid getting tangled up in conflicting UK and EU trading “obligations.”

Steven Maijoor, chairman of the European Securities and Markets Authority (ESMA), said there will be clarity before year-end on where EU investors must trade derivatives like interest rate and credit default swaps.

“The UK branches of EU entities are subject to both the EU and UK derivatives trading obligations and we need to give clarity on how to address that,” Maijoor told Reuters.

One solution would be to allow EU branches in Britain to do their derivatives business under UK rules, a proposal made last year by Robert Ophele, chairman of France’s markets watchdog AMF.

This would allow the EU banks to maintain access to London’s highly liquid market in swaps on behalf of EU clients.

But the current lack of clarity could benefit New York which competes fiercely with London in swaps trading.

Ophele, also an ESMA board member, has said that EU banks could lose out on achieving the best prices in derivatives deals if they are shut out of London and would have to shift some hedging to the United States.

“The key issue for us is that whatever solution we come forward with it also needs to be in line with legislation,” Maijoor said, referring to the EU’s securities law.

But the International Swaps and Derivatives Association (ISDA) said it was unclear how EU branches in Britain would be given flexibility fast enough in time for January if the underlying EU law needs changing.

“Switching trades to U.S. swap execution facilities is not necessarily straightforward as some clients may not be able or permitted to do that,” said Roger Cogan, head of European public policy at ISDA.

He said if the EU granted “equivalence” or full access for UK platforms to EU customers it would avoid fragmentation of markets that is detrimental to prices.

Brussels wants reassurances from Britain that its rules on derivatives will be aligned with the EU’s regime before giving the green light on equivalence, a request that makes UK regulators bristle.

Britain’s Financial Conduct Authority has said it will spell out its own derivatives trading regime by the end of the year.

The best outcome would be equivalence, which would support global capital markets, Maijoor said.

He also said that the European Commission will not be able to decide on equivalence until it has sufficient information and assurances from Britain that it will not deviate from EU rules.