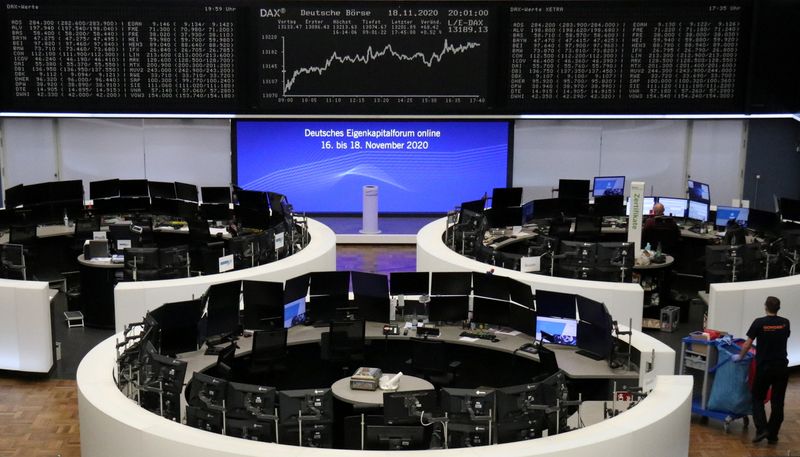 (Reuters) – European shares eased slightly, while staying near nine-month highs on Wednesday as a relaxation of coronavirus restrictions in the region and growing hopes that a vaccine would soon be ready kept sentiment afloat.

The pan-European index inched lower by 0.1% at 0925 GMT as gains in the utility and telecom sector were outweighed by losses in automobile stocks.

Promising results from three major pharmaceutical companies on their COVID-19 vaccine trials and improving prospects for a smooth White House transition have sent U.S. stocks surging to record highs and put European equities on track for their best month ever.

A Reuters poll expects the STOXX 600 to climb to 430 points by the end of 2021, just a whisker below February’s record highs, as economic activity returns to normal following the coronavirus-induced downturn.

“The overall feeling is that things are heading in the right direction,” said David Madden, analyst at CMC Markets.

“A mixture of vaccine optimism and the fact that the decline in economic output, because of most recent lockdowns, hasn’t been as bad as initially thought is going to continue to push the index higher.”

Germany and the United Kingdom unveiled plans to allow gatherings with limitations for Christmas, while France will start easing its lockdown this weekend after a sharp drop in new infections and hospitalizations.

French President Emmanuel Macron said on Tuesday a vaccine could start being administered as soon as the end of the year if approved by regulators.

UK’s domestically focused mid-cap , however, underperformed after the EU’s chief executive said the European Commission cannot guarantee there will be a trade pact with Britain after its departure from the EU, and the coming days will be crucial.

Investors will turn to a spending review due to be delivered by British finance minister Rishi Sunak later in the day, where he will likely announce extra investment to ease a backlog in the health system, counter a surge in unemployment and build new infrastructure.

Virgin Money (LON:) UK dropped 5.5% after the lender reported a slump in annual profit as it took an impairment charge against an expected surge in bad loans.

United Utilities (OTC:), one of the largest listed water companies in UK, jumped 4.3% as it proposed a higher interim dividend.